In the Inland Empire, A Few Good Men. (F3 Continued.) 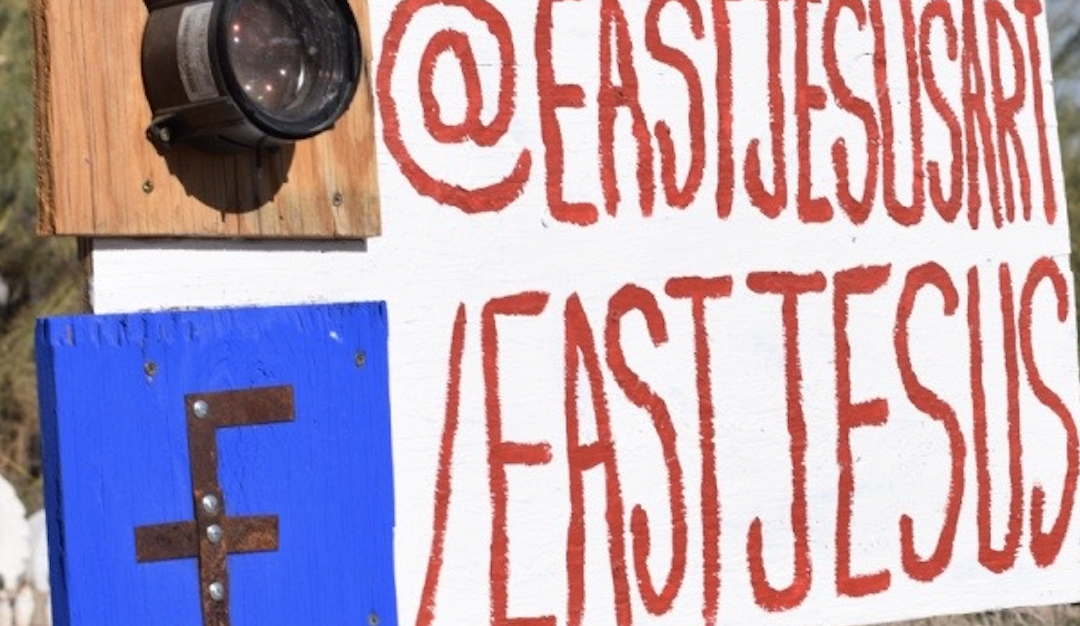 In my last blog, I explained how I had come across F3, a workout group that seeks to foster the three “F’s” of fitness, fellowship, and faith. There are 3,500 such groups in the United States. There are none in Los Angeles.

I thought briefly of filling the L.A. void by starting my own group. As I read the group’s literature, however, I realized that the workouts were meant to be difficult, the equivalent of a boot camp. At 67, I didn’t think I could lead such a group. I could barely hope to keep up with it. Scanning the F3 website, the nearest group I could find was in Rancho Cucamonga, in what is known as the Inland Empire, about 40 miles from my home.

In the sprawling Los Angeles basin, those who live near the ocean sometimes refer to the vast area towards the desert in the east as “East Jesus,” a fictional place just beyond civilization. Today, artists have set up a real-life East Jesus near the Salton Sea, a godforsaken, chemically wounded lake at the edge of the desert. There they live in rejection of the vast waste-producing evil empire of Los Angeles. To the west of East Jesus another artists’ outpost calls itself  “West Satan.”

I still think of the Inland Empire as East Jesus. 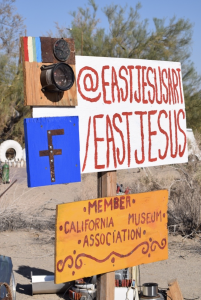 When I first came to Los Angeles, I stayed briefly with two college roommates who had moved from Michigan before me. They settled in one of the new housing developments in Rancho Cucamonga, the only place they could afford. They were proud of the first home they bought there. It cost them much less than $100,000. It would be worth half a million today. Every day my former college roommates made the brutal commute to Los Angeles for their jobs. For the first week, they dropped me off at my job in downtown L.A. That weekend, my friends drove me to a local dealership where I bought my first car, a 1978 Camaro Z-28. I put a few hundred dollars down and drove that used and brutish auto on the I-10 to find my first apartment, ready for the next three years of car payments and the next 43 years of battling the Los Angeles traffic. 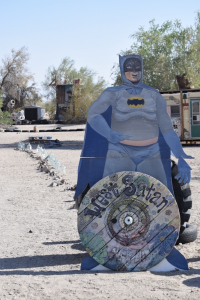 Checking with the F-3 national organization’s new membership contacts, I verified that The Inland Empire group was the closest A.O. (“Area of Operations”) in which F3 was active. The Inland Empire group had a workout at 6:30 a.m. on Saturdays at Red Hill Park, a giant recreation park in Rancho Cucamonga. Though my former Michigan roommates had made the daily round-trip from there back in 1979, today it is an unfathomable commute during the morning rush hour. Nevertheless, my GPS informed me that, on a Saturday morning, it can take less than 40 minutes, which is about what it takes me to make my 12-mile commute each day in Los Angeles. I decided to give it a try.

Sure enough, at that hour of the morning, I sailed in the dark toward the east, passing into San Bernadino County after only 30 minutes. I arrived to find the park completely empty and in darkness at 6:15. I started walking from one area to another and was at least a half-mile from my car when I noticed a small group of lights around a couple shovels in the ground. For those who can see at the eary hours, F3 Areas of Operation are identified by an American flag and a group flag, each attached to a shovel stuck in the ground. I could not distinguish the faces of the six men in the glare of the flashlights from a few heads. I was quickly identified as an “FNG” or “Friendly New Guy.” I said I was thinking of starting a group in Los Angeles and was visiting to see what it was like. Because we could all barely see each other, I felt it necessary to note: “I’m older.” When that didn’t get a reaction, I added: “Please don’t kill me.”

I needn’t have worried. The F-3 Credo is “Leave no man behind but leave no man where you find them.” The workouts are designed to move from one location to another, with the “Sugar Rays” (light, fast guys) leading the way for the “Clydesdales” (gasping older fellows like me). The group forms a circle or line at each location, sometimes called a “Circle of Pain” or “COP.” (In F3, everything is eventually abbreviated, like the term F3 itself.) Within the Circle of Pain, there is a variable level of performance, especially, in our group, by me. The group moves to the next Circle when the younger guys are done. 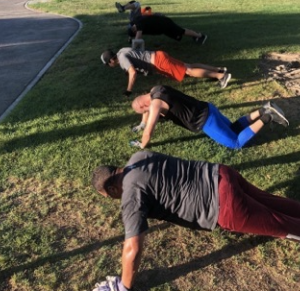 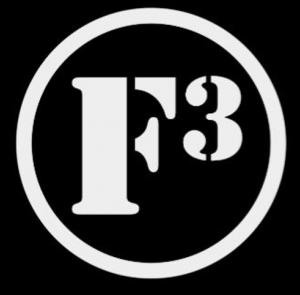 I’m making it sound too much like Dante’s inferno, but the goal is to push each PAX (man) who “posts” (shows up) to their limit. This is the job of the Q (leader), designated for that day only to keep a permanent hierarchy from forming. Rotating the Q function also advances the F3 goal of developing leadership by encouraging each man to take a turn being the Q (workout leader). (The abbreviation Q was chosen long before QAnon was a thing if it even is a thing.)

In my own case, I had grown too comfortable in my morning workouts and was not pushing myself much above a heart rate of 110. Within 5 minutes of arriving at the A.O., my heart rate was 150, and I was gasping for air. I had forgotten that I even had asthma. After the first week, I renewed my prescription for an inhaler.

You will do a lot of pushups at F3. At F3, they are called “Merkins.” This is short for standard American pushups. There are also the World War II pushups, which involve first doing a classic sit-up, then flipping over to a pushup, flipping back again, etc. They also do a lot of Burpees. Do you remember Burpees? I vaguely remember them as the torture or punishment phase of my high school physical education classes. I always imagined they were invented in the 1960s when President Kennedy was concerned that we were getting too soft to have the discipline necessary to get to the moon. You wonder what he would think now. The Burpee combines four exercises: Jump, Squat, Plank, and Pushup. This month, the members of my F3 group are challenging themselves to do 100 Burpees a day as part of an F3 Nation program called MABA or “Make America Burpee Again.” Try doing one if you’re wondering whether F3 adherents get in shape. At my age, I can sort of start one. Getting down on the ground is one thing, of course, and getting up from the ground is another thing altogether at 67. My Apple watch wanted to know if I had had a severe fall and needed to call 911.

When the last Circle of Pain is completed, and the group shuffles back to the original site, they gather in the Circle of Trust (“COT”). As the sun rose, I began to see the group’s diversity, which we focus on to a fault these days but which hadn’t mattered in the last hour’s struggles. In the Circle, I would be transformed from a mere Friendly New Guy to an officially named PAX. The Q bestows the FNG’s official F3 nickname. Everyone in F3 goes by such a nickname, which encourages the notion of a different brotherhood. My contact in the national organization told me that F3 names aren’t for you to choose. A proposed nickname I liked would more likely be selected if I were to say I disliked it. I really liked the first name I was given, “Wolverine” (because I was wearing a Michigan shirt). Yet when I said I didn’t like it, the group, contrary to the usual practice, was very agreeable to searching for a new one. They settled on “Gavel.”

F3 is a group that identifies with faith in general but tends to the Christian in the particular. Still, in the Circles of Trust and our coffee chats afterwards, the members have discussed the need to include all faiths and to make them comfortable. In our group, everyone seemed to make a prayer request. So I made one after a couple weeks, asking that my relationship with a relative who had refused to speak to me be renewed. When my voice cracked, I realized how deeply this fissured relationship was hurting me. The group took up this prayer with the others of the day. What happened next surprised me. The group remembered my intention. For weeks, the prayers were renewed without a word from me. Several of the guys inquired earnestly about whether things had gotten better. They were not nearly as amazed as I was when the prayer was answered.

After a couple months of going one day a week to the Inland Empire, I can verify that the way the group pushes you will lead you to push yourself harder. I’ve set a new goal to run a half marathon this year, a goal I abandoned when Covid hit just a few days before my last scheduled race.

I can’t say your every prayer request will be answered. In today’s world, there are news shows you can watch that will fill you with the despair Abraham felt when he realized there were no good men left in a nearby city. (Genesis 18:32-33.) I can’t say miracles will occur if you join F3. I can say you will find a few good men, better men than you thought were out there, and they will pray for you, and it may inspire you to do the work necessary to do the right thing enough to be a better man.

F3 is assiduous in its pursuit of new members. “Don’t worry,” I told one of them. “Your light shines in the morning darkness. Other men will see it, and they will come to it.”