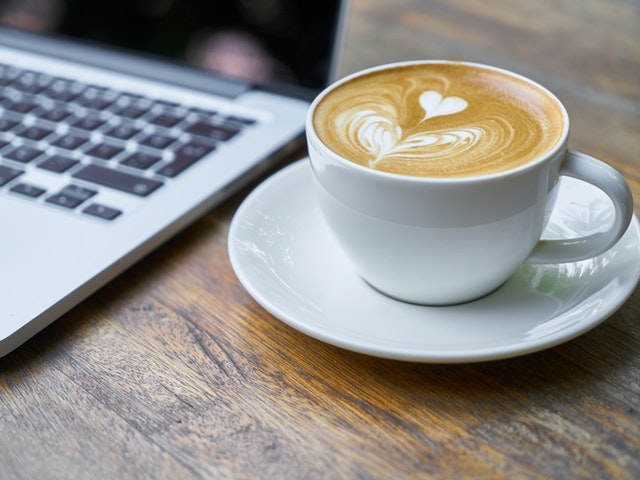 I like my Apple Watch, I really do. At least I keep telling myself that.

My new book, Three Bodies by the River, is set in the nineties. It was the decade when cell phones morphed from luxury to necessity. As the decade ended, my son graduated from high school. I was feeling very proud and advanced to have a phone in my car. Immediately after my son’s graduation was scheduled to end, I needed to board a flight to China for business. While driving to the graduation, I received a frantic call. More flowers and cards were needed to make the day complete. Suitably detoured, I accomplished the mission and arrived at the graduation on time. Then the graduation speeches ran long, desperately long, and I had to leave for the airport. I ended up congratulating my son from the airport parking lot just before walking across the bridge to the international terminal to board the flight for China. I thought to myself: I no longer have this phone, it has me. My life has changed because I have this phone. Without it, I wouldn’t have let the schedule get this tight. I wouldn’t have even tried to get away with it. Now, everything has to be scheduled tighter. I have this extra productivity, and people will expect me to use it.

In Three Bodies by the River, the main character throws his cell phone in the Los Angeles River, a storm drain that runs through the industrial heart of Los Angeles. There are days when I wish I had done the same, that we all had done so.

The cell phone now has an extension, the cellular watch. As I say, I like it. I like the reminder it gives me to move around and exercise each day. I like that I can go running without carrying along something as bulky as a cell phone and still listen to music and books on tape. I like the way it wakes me up with a gentle tugging on my wrist so I can get up without disturbing my wife.

But it also has a troubling side.

It seeks control. At first, it seemed like a gentle mentor, telling me to stand when I had been sitting for an hour. Sure, ok, but maybe I needed to sit because maybe I needed to get some writing done. Then there were the breathing exercises. These were nice, I suppose, as it always helps to breathe. But the watch seems to want me to do breathing exercises at times when I would have felt more centered if I had been left alone. Then, the pandemic came, and the handwashing monitor was installed on the phone. The watch senses, usually correctly, that you are washing your hands. Then it starts a timer that encourages you to continue for 20 seconds. The watch handwashing standards, however, are very hard to meet. If you are not using the correct motion, it doesn’t count. You could be washing your hands for minutes instead of seconds, just to satisfy your watch. If you fail to satisfy it, the watch follows up with snarky questions about whether you were really washing your hands at all.

This is a watch that watches you. At first, I was impressed that the watch could actually figure out when I turned to do another lap in the pool. Anyone who swims for distance knows how frustrating it is to count laps, then start thinking of something else and lose count. Did I do sixteen or eighteen? If it only did that, I would be happy. Unfortunately, the watch is not only a watcher, but a stalker. If you go to the gym after work on Tuesdays, then it will prompt you to do that. If you have a favorite restaurant you go to after that, it will prompt you to do that too. If you fall, it offers to call 911. It counts every breath you take, every move you make. It knows whether you are running, walking or doing the stair machine.  It counts every heartbeat. Like Santa, it knows when you are sleeping. It knows when you are awake. Does it know whether you’ve been bad or good? Don’t kid yourself, of course it does.

You can read about all this elsewhere, but my watch has done something to me that I have never heard of anyone else’s watch doing to them: It has given me a new identity.

One day, my watch started calling me by a new name. My emails to myself started to say they came from a different person. The new name was “Starbucks Donde Freed.” When I get a prompt, that is what the watch calls me. As in, “Congratulations, Starbucks Donde Freed, you have met your move goal.” Do I really want a new identity? How did it choose this name, this identity? I wonder. Well, the watch knows I go to Starbucks, quite often in fact. But Donde? Of course, it means “where” in Spanish, and I am often wondering where to go next. An internet search reveals that there are people who actually name their children “Dondee,” with two “ee’s.” The Internet says it indicates someone who is a good steady worker, someone who takes responsibility well. Ok, I’ll answer to that. And Freed? Well, I would like to be Freed. 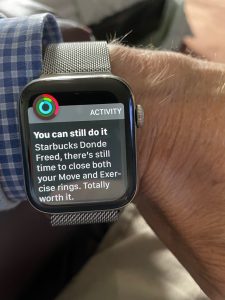